Fighting the alcohol curse in Kiambu

Kiambu County Government’s Kaa Sober programme that was launched by Governor Waititu Babayao last year is set to bring down the ranking of the county as one of the major consumers of illicit alcohol after the County Government cracked down on all the brewing and drinking dens. The County has also introduced more stringent measures in the licensing of bars and banned the operation of Wines and Spirits selling joints to curb the spread of the illegal drinks. This has been guided by Alcoholic Drinks Control Act and other county laws as control of alcoholic drinks is a devolved function.

A recent report by the Kenya National Campaign against Drug Abuse Authority (NACADA) indicated that there are over 4.9 million Kenyans addicted to drugs with the World Health Organization (WHO) reporting that that four out of every 100 people who lost their lives in Kenya in 2016 were as a result of alcohol abuse.

The production of illicit brews in Kiambu County has been common for over three decades especially in Gatundu North Sub-county that is considered to be the production hub of chang’aa in the region. The consumption of chang’aa has remained predictably high in Kenya at 37 per cent of all the alcohol consumed, WHO reports.

Teresia Nyokabi, aged 36 from Miteero in Gatundu North comes from what she says, a family of many drunkards. She dropped out of school in Standard seven because her father who was a drunkard could neither get employment in his state nor manage any enterprise. The mother could as well not afford her school fees. Her brother is a drunkard more than his father and is normally collected lying in ditches after a few days of taking chang’aa and other illicit drinks brewed in the area.

The 2016 WHO report attributes over three million global deaths to alcohol as a result of injuries, digestive disorders, cardiovascular diseases, infectious illnesses cancers and mental disorders. Teresia’s sister was also a drunkard and the power of the harmful glass led her to her grave. Teresia is a mother of four children and since she started drinking, she separated from her husband and has not been able to fend for her family. “Alcoholism turned my life upside – down,” she says, “I had become totally addicted and dependent on alcohol to an extent I was shivering if I did not take a glass of chang’aa.”

Teresia then realised that her life was in danger and if she did not change her drinking habits, she would die. She joined Kaa Sober seeking an alternative. Since her health was poor, the Kaa Sober programme took her to Igegania Health Centre for treatment. She got free medication and was put through corrective counselling and feeding programme courtesy of Governor Waititu Babayao. In a few weeks she had regained her health and was able to eat properly. She was engaged in doing manual jobs for the county at a daily wage of KShs 300. All this time, she was being trained on how to withdraw from alcoholism, which she eventually did.

She was later enrolled in Mang’u Vocational Training Centre for a tailoring course which she trained in earnest. “I am now able to make all types of clothing for both men and women,” she says amid evident happiness. She is also looking forward to the forthcoming graduation and funding where she plans to buy a sewing machine to start her dressmaking industry. “I shall buy a Singer machine and will be repairing clothes at our area and also making new ones,” she says, “I will also be looking for tenders to supply the county hospitals and other institutions with uniforms at a subsidised price to express my gratitude to Governor Babayao.”

The alcohol curse suffers various impinging factors among them withdrawal symptoms and lack of alternatives. To fully assist addicts to quit alcoholism, they need to be given meaningful opportunities where they can generate income and be offered healthcare. Through the Kaa Sober programme, those rehabilitated are now able to start new ways of life and act as role models to those still rooted in the curse. “I now loathe the sight, smell or even thought of alcohol, knowing where I have come from,” Teresia says, “I thank the Governor for the transformation he has given.” 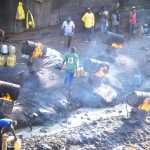